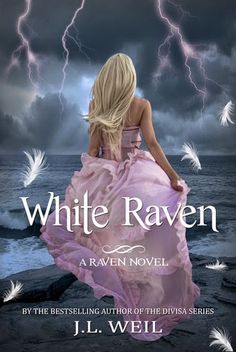 The murder of Piper’s mother is still a very recent, fresh scar for the three family members left behind. Piper’s father, in an attempt to work through his own pain and to restore some sense of normality to his children’s lives, sends Piper and her brother to the island of Raven Hallow to spend the Summer with their estranged grandmother.

At first, Piper is furious. How dare her father dump the two of them with a grandmother she’s never even met? Then she meets blue-eyed Zane Hunter. The attraction is mutual and instantaneous. But there’s more to Zane than meets the eye. As Piper strives to uncover the truth about Zane, she discovers that there are more than a few family secrets hiding in her own closet – secrets that could kill her.

The fantasy world of Raven Hallow is intriguing, although I’m still unsure exactly how the powers and hierarchy works. Some of the fantasy elements could have done with more explanation. The characters were also mildly interesting, but I found them hard to pin down. Piper and Zane both came across as inconsistent and lacking motivation, and I struggled to find the developmental arc. Rose’s character was a pivotal one in the story, but I felt she was side-lined and many of her actions didn’t make sense when it came to Piper. It was entertaining, but not gripping enough for me to continue the series.