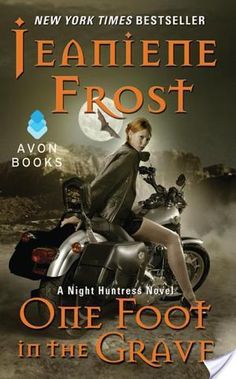 Vampire hunter Cat left the man she loved behind years ago to ensure his safety. Now she’s working for the secret homeland security division as their secret weapon, using the skills her undead lover, Bones, taught her to protect the human world from unscrupulous vampires. But there are rumors flying around in the underworld and more than one contract has been put out for the capture, dead or alive, of the vampire killer known as the ‘Red reaper’. Only one man can help Cat now. Can she overcome the feelings she still has for him and keep it professional?

Cat and Bones are by far two of my favorite fiction characters ever. I first read this series four years ago, and decided to re-read (or listen with Audible to be exact because narrator Tavia Gilbert is amazing!) the series because I haven’t been able to forget the memorable characters Frost created. Arguably, the second ‘read’ is even better than the first! Frost has written into life such a rich world of fantasy, populated by vampires, ghosts and ghouls. Just when you think she can’t possibly come up with something more imaginative, she stretches the limits by introducing yet another plot twist or complex character. The romance in this story is both sweet and scorching, with this being the hottest novel in the series. One of my favorite things about this series is the witty humor. Frost has a definite talent for sassy, quick and dirty humor, and this makes Bones, in particular, a character that will creep under your skin and stay there for years after reading the Night Huntress series.

2 thoughts on “First series I’ve ever re-read (It’s that good!)”